As part of the Junction Works between Seville Place, Guild Street and Sheriff Street Upper the Newly constructed Junction which included cycle lanes was fully resurfaced including sections of full pavement make-up.  The works involved the planning out of the existing wearing course through the signalised junction and the laying of new surface course which was carried out by Kilsaran.

There were substantial earthworks within the site with the disposal of domestic waste and a large quantity of unsuitable material including Knotweed which was disposed of offsite to approved Landfill facilities.

The canal works included the reconstruction of 60 m of the canal wall and construction of a floating pontoon. The newly constructed canal wall of which 45m consisted of driven sheet piles with concrete facing and 16m of reinforced concrete base and wall both sections finished using a board mark form liner finish. The works within the canal was carried out by dewatering a section of the canal using a temporary cofferdam. The dewatering was carried out using silent pumps discharging into filter beds before entering back into the canal. On completion of the canal wall the dewatered section of canal was lined with a HDPE geomembrane and puddle clay. The puddle clay was supplied and delivered by Ballycrystal Enterprises Ltd from Tullamore Co. Offaly

As part of the cycleway construction Jons Civil Engineering Ltd., installed a new Viaduct Bridge 115m long over the Newcomen Rail Line. Working over the live rail offered considerable constraints and Jons Civil Engineering Ltd., consulted on a daily basis with Irish Rail.  The coordinated works required absolute Line Possessions during installation works with sign off from Irish Rail and Dublin City Council prior reopening of the line.

The Viaduct Deck was constructed of concrete with a combination of cast in situ sections and precast deck slabs over the live rail track. The precast sections for the project were supplied by Banagher concrete with the in-situ concrete being supplied by Roadstone concrete. The in-situ deck support system was the RMD Rapid Shore System, Alform Beams, timber and plywood.

To complete the structure, bespoke handrails were both fabricated and installed along both sides of the completed Viaduct Bridge making a smooth transition into the existing Newcomen Bridge. The handrail fabrication and installation were carried by Mackey Plant Construction Ltd.

The bridge deck surfacing is a combined surfacing and waterproofing system supplied by GCP applied technologies. The system used a primer, Eliminator waterproofing membrane and safetrack HW for the surfacing. Installation works was carried out by Ecoflex Surfacing Ltd.

There was extensive Traffic Management, carried out on both the junction of Seville place/Guild street and the North Strand Road. Special consideration given for works on the North Strand road as it is a main artery entering into Dublin city (AADT 25,000) and is a Traffic Impact No 5 Road as per the Dublin City Council Roadworks Directive which resulted in extensive weekend works to avoid traffic disruption.

Due to the complex network of existing services on North Strand Road and Seville Place/Guild Street Junction Jons Civil Engineering Ltd., utilised non-destructive excavation where possible. The presence of many critical services including ESB 110 kVa in the area also made the use of vacuum excavation critical to the works. The vacuum excavation services were supplied by Gmac Utilities Ltd.

The boundary fencing and barriers was fabricated and installed by both Mackey Plant Construction Ltd and Irish Fencing. The landscaping was carried out by Peter O’Brien Landscapes.

To read more on the opening:  The Royal Canal Premium Cycle Route 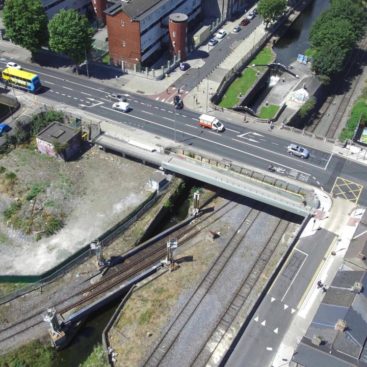 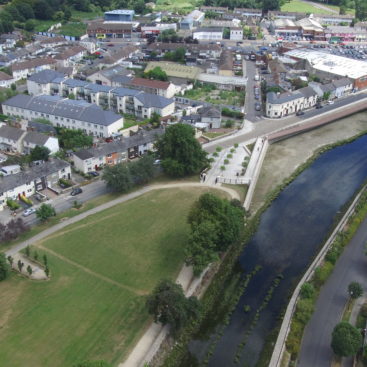 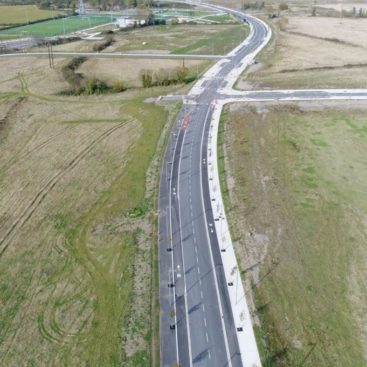